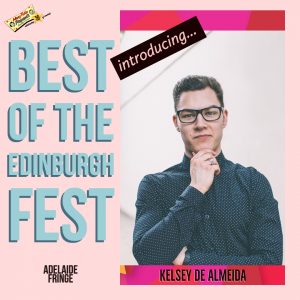 What are you most excited about coming to Australia?
It’s got to be the weather, right? Hot weather and sun make people happy. And I make people happy for a living, which in turn makes ME happy. Also, my birthday is in January, so every year in February everyone is; poor, fat and depressed after Christmas in the UK so couldn’t care less, I entered the world at that time of year, so I’ll be celebrating a belated birthday here with you guys.

Having said that, I’m not one to sunbathe. I avoid the sun mostly. Meaning I maintain my pasty white skin unfortunately. I went to Portugal a couple years ago to visit family, and in the group photo it just looks like I’m haunting them.

Most memorable comedy moment?
I did a gig and as soon as I walked on stage there was a man clearly using is phone in the front row. So, I called him up on it, and he said he was trying to get hold of his friend who was supposed to meet him at the gig but hadn’t heard from him in the last hour but said ‘He’s probably fine’. So, I spent 5 minutes calling him a bad friend for just committing to the comedy rather than the wellbeing of his friend, and I said if he’s been hurt and comes in on crutches, we’re all going to feel guilty for just laughing at his absence. Anyway, I do my 20 minutes. I’m wrapping up, then there’s a commotion at the back of the room. I ask what’s going on and someone shouts “That guy’s friend has just arrived!”. I said “Oh great! Well we’ve saved you a seat up front for you, come over”. And as he made his way up front people began giggling and then it broke into them howling with laughter, I wondered what had happened? And as he came into the light it became apparent what they were laughing at. He was on crutches. I felt so bad. But I have added ‘medium’ to my CV so wasn’t all bad.

Best pump up song before you head to a gig/on stage?
‘The Nights’ by Aviccii. Not only is it a brilliant tune, but it includes the lines ‘someday we’ll leave this world behind, so live a life you will remember’ – which weirdly can help calm me down and instead pump me up before walking in front of a big crowd.

Do you have any pre-gig superstitions/traditions?
Not really. I’ve tried to avoid doing that because those superstitions can snowball. One minute your ritual is a quick pre-gig stretch, the next you’re on the floor counting pennies because you can only go on if you have exactly 47 pence in your left back pocket or you may have a bad gig!

Go-to meal to cook when you’re on tour?
I’m 22. I don’t cook. I’m lazy. If readymade meals didn’t exist, I’d be living on a diet of pot noodles and protein shakes.

But to answer your question; pot noodles and protein shakes.

What song gets you on the dancefloor?
Anything cheesy! I love the ones you don’t have to dance to, to be ‘cool’. I was at a Christmas party and they played an ABBA song at one point, and it was embarrassing how excited I got! Is that bad? I’ve only seen Mamma Mia 13 times though, I’m not, like, weird..

What’s your cure for hiccups?
Hiding until they go away. It’s so embarrassing as an adult to get hiccups. It’s only cute if you’re a puppy or under the age of 10. Anything over that and it’s just awful. And it always strikes at the WORST moments! It’s always; on a date or in a meeting. It’s never when you’re doing the washing up! Then your work colleague tries to scare you spontaneously to get rid of them, but your human instinct in danger is to react, so now Tom from accounts is unconscious because you gave him an elbow to the face and now, you’re scared you may lose your job – which, incidentally, gets rid of your hiccups. Is that an answer?

Who did you idolise as a kid?
Lee Evans. The first time I watched one of his DVD’s, it changed my life. I’d never seen comedy quite like it. He was a loser like me, and yet the coolest person ever because he made people laugh. An absolute legend in my eyes. I’d love to work with him someday.