He’s an Adelaide favourite (or maybe it’s the other way around, we all know Adelaide is Jimmy’s favourite!) – if you’ve been to Best of Ed Fest in the last few years, you may well have seen him work his magic on the stage already. The “tediously handsome” (Fest) Jimmy McGhie is back and as social media-phobic as ever. 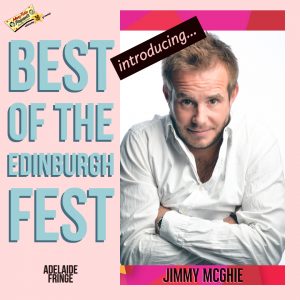 Best meal you’ve had in Adelaide?
Breakfast at Market Street Cafe, lunch is chicken rice at the Chinatown Cafe on Moonta Street, dinner at Udaberri on Leigh Street. Boom, that is a good day’s eating!

Best pump up song before you head to a gig/on stage?
Embarrassingly P.I.M.P by 50 Cent does quite a good job.

Do you have any pre-gig superstitions/traditions?
I have pre-show OCD and everything must be symmetrical. If someone pats me on the shoulder, I make them repeat it on the other shoulder or I feel weird.

Go-to meal to cook when you’re on tour?
Granola, full fat milk and fresh strawberries and a nice cup of tea.

Most used emoji?
I have never used an emoji. Smiley wink face.

What’s your cure for hiccups?
I get the person to put their hands above their head and breathe deeply. Then after a few seconds I scream “STOP F**KING HICCUPING’ at the top of my voice.

Who did you idolise as a kid?
Robin Smith aka ‘The Judge’. The hardest man to ever bat for England, currently resides in Perth I believe.