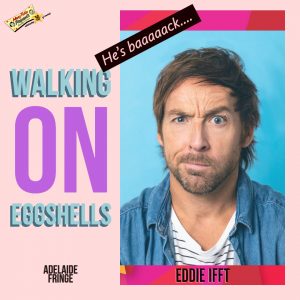 US Comedian Eddie Ifft has been known to consistently push the boundaries of political correctness by finding humor in just about every taboo subject. With the emergence of the “outrage” culture, the stakes have risen. In 2019 Eddie will deliver his most powerful hour of stand-up comedy yet, as he attempts to navigate through this mine field of social justice.

Eddie takes a pause from headlining in over 20 countries to bring you a whole new hour of extraordinary funny. When he’s not performing live, Eddie is the host of one of the most successful podcasts in the comedy world, ‘Talkin’ Shit’. As a result of his wife telling him he couldn’t record at home any more, Eddie recently organised a kickstarter campaign to fund ‘The Bingle Bus’ – a mobile podcasting studio, enabling him to take his popular podcast on the road.

A favourite on Australian TV and a regular on every major network in America, Eddie has filmed two critically acclaimed DVD’s in Australia along with his own Comedy Central special in the US, and performs internationally year after year.

“….he had the crowd crying with laughter within the first 20 seconds of him hitting the stage” 5 Stars, The Clothesline

“The torso aches… a morning after side-effect of constant, heaving laughter.” The Advertiser

“Ifft’s jokes are damn funny. And they’re often funny for the very reason that he is so gloriously uncompromising” Chortle